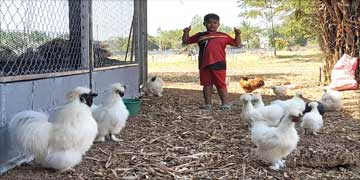 The Silkie (also known as the Silky or Chinese silk chicken) is a breed of chicken named for its fluffy plumage, which is said to feel like silk and satin. The breed has several other unusual qualities, such as black skin and bones, blue earlobes, and five toes on each foot, whereas most chickens only have four. Silkies are well known for their calm, friendly temperament. It is among the most docile of poultry. 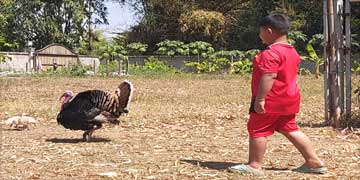 Turkeys come in different shapes and sizes, the large one is a popular food source, especially at Christmas in western countries. The domesticated turkeys at our farm are friendly, in contrast to wild turkeys which can often be aggressive to humans and their pets. 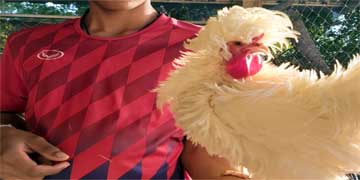 The Polish or Poland is a European breed of crested chickens known for its remarkable crest of feathers. The Polish breed is calm and gentle, so it is great to have around children and other docile breeds like the Silkie Chicken 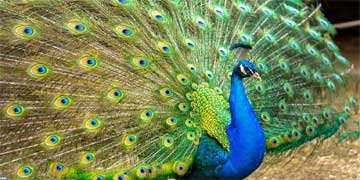 Peacocks are some of the most spectacular birds with their brilliantly bright colours and their massive display of feathers that they fold out. 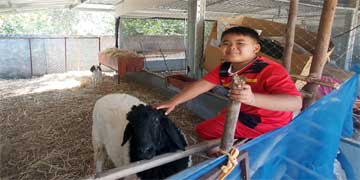 Diamaond is our Black Persian sheep, this breed grows hair instead of wool which is more suited to a tropical climate like Thailand. He was abandoned by his mother and raised in the company of dogs, which made him behave like a dog too. 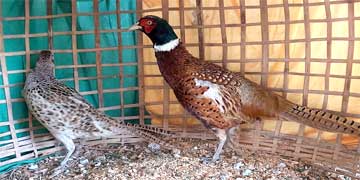 Pheasants are beautifully coloured birds native to Asia. The males have much brighter colours than the females. 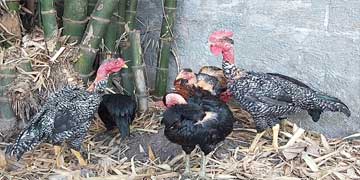 We also have some "normal" chickens.
Did you know there are more chickens than people on this planet? 24 billion of them! 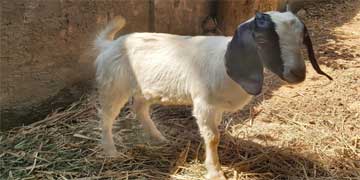 Goats were one the first animals to be domesticated by people about 10,000 years ago and they produce milk and meat. 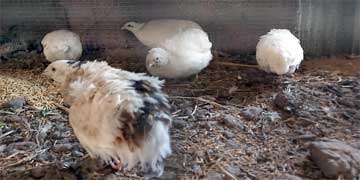 Quail are part of the pheasant family, and these small birds are prolific egg layers.

We have a lot of animals on our farm at Bua Daeng Homestay, and the kids love to play with them and feed them.
They are all friendly and gentle and like the attention they get from our visitors.